The Eco-Protest Special Operation. The events in Ukraine’s effect on eco-protests in Russia, illustrated by five regions 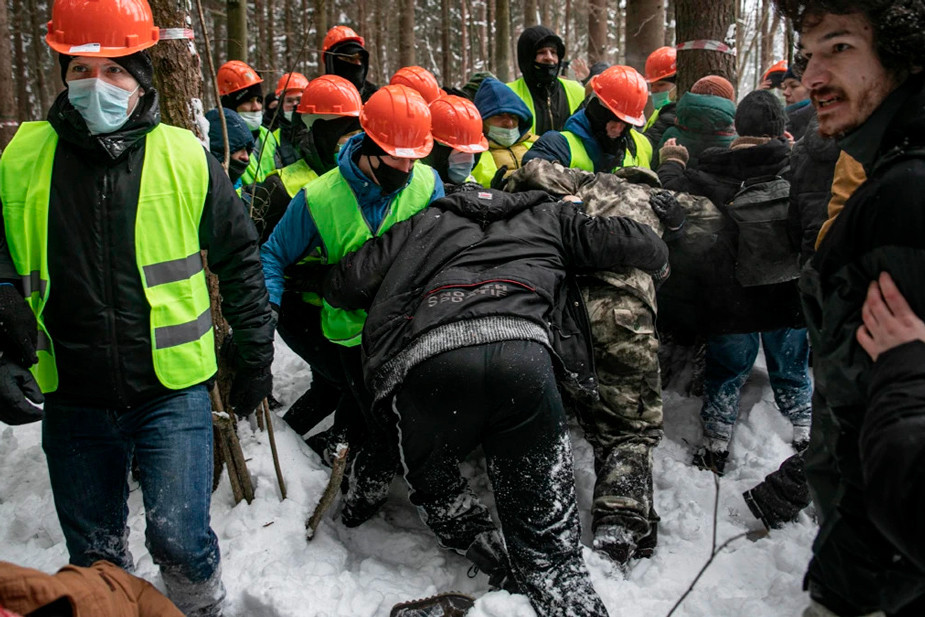 The number of environmental protests in Russia sharply decreased as soon as the military special operation started in Ukraine. The EcoProtesty. Rossiya (‘Eco-Protests. Russia’) Telegram channel’s authors reported this trend in early March. In the beginning of April, environmental protests became covered again. Although activists are being under pressure and punished under "anti-war" articles, they continue fighting for the environment. We talked to conservationists from five regions about whether the special operation in Ukraine had affected their local protest.

"Nothing should damage the common cause." Logging of the Troitsk Forest in Moscow

What the activists are fighting against: the Moscow City Hall decided to build two highways and a school on the site of the Troitsk Forest in New Moscow.

Local residents filed complaints, collected signatures, held protests for the forest’s preservation, set up a camp in it and organized a round-the-clock duty post. They wanted to prevent workers from cutting down trees. In response, the protesters were attacked by PSC officers and "people with chainsaws." 500 people attended one of the most massive actions in defense of the forest in mid-February. The police detained 14 activists. Some of them were fined and arrested for resisting law enforcement officers.

The protests continued after the special operation started in Ukraine. Despite the police’s pressure and the tent camp’s destruction, environmental activists distributed newspapers describing the situation, appealed to Putin, blocked the road to trucks with logs, launched a flash mob for the forest’s preservation, and took part in a panel discussion on the issue in the Moscow City Duma.

The Initiative Group For the Protection of the Troitsk Forest's lawyer Olga Slastunina told 7x7 that the special operation in Ukraine had not affected the protest. According to her, the activists agreed that the attitude to the special operation was a personal matter for everyone, and the fight for the forest was a common cause.

"The Troitsk Forest is the heart of Troitsk. People who are protecting the forest are protecting themselves and their home. We do not put the special operation and the protest on the same level. We had a war for the forest even before it. We agreed that the discussion of the special operation was beyond the protest. Nothing should damage the common cause," says Slastunina.

According to her, "provocateurs" sometimes accuse the activists of Troitsk of distracting attention from the special operation, but they suggest telling such people about protecting the forest.

"People are being less concerned about nature." Logging in the Volga-Akhtuba Floodplain

What the activists are fighting against: local officials decided to build a speedway in the park on the Volga-Akhtuba Floodplain’s territory, protected by UNESCO. Logging began in the floodplain.

The activists collected 46 thousand signatures against the floodplain development, held pickets, stood up as a human shield in front of construction equipment, and set up a tent camp, which was dispersed by the police. The activists were supported in other regions, and dozens of environmental organizations asked the Prosecutor General's Office to save the trees.

The protesters were fined and arrested, and in February 2022, the court sentenced the floodplain’s defender to two years in prison for fraud with waste recycling patents. Officials dismissed the nature park’s head, who also opposed the construction of the road.

After the special operation started, activists continued complaining to the authorities about the logging and held actions. But lawyer and environmental activist Anton Getmanenko believes that the special operation in Ukraine has influenced their protest greatly. People are being less concerned about nature, and they have become less responsive to the situation with the Volga-Akhtuba Floodplain. In April 2022, the court fined environmental activist Mikhail Solomonov for clarifying comments about Russian conscripts in Ukraine in social networks.

The environmental activists fighting for the park have become passive.

“There are two main groups. The first stopped the protests, as they believe that any actions are weakening the society's consolidation around the goal, the victory in [Roskomnadzor]. The second are afraid to get it in the neck. The authorities have been convinced that the protest is sabotage. Journalists ignore environmental issues, as readers do not like such material,” Anton Getmanenko told 7x7.

Tired people. Landfill in the village of Gorbachyovo, Vologda Oblast

What the activists are fighting against: the authorities want to build a waste sorting plant near the village of Gorbachyovo, Velikoustyugsky District, to receive 50 thousand tons of residential solid waste per year.

Local residents complained that the authorities had not agreed with them on a construction project that could poison water from wells and rivers.

Citizens began regularly holding pickets, started a protest community on vk.com, where they published the answers of officials to their requests about the dump, released stickers "Stop the dump in Gorbachyovo!", launched a petition against waste import from other regions of the country. And when the environmental activists organized a protest volunteer clean-up, the police opened cases of violation of coronavirus restrictions.

The activists continued maintaining the community on vk.com after the special operation started in Ukraine. But the pickets were held less often. Then they asked the State Duma deputies and officials of the Ministry of Natural Resources of the Russian Federation to intervene in the situation. The department replied that the "high-tech" complex met all environmental requirements. And in May, the landfill’s opponents held pickets again.

The opponent of the waste sorting plant’s construction and local journalist Antonina Smolina told 7x7 that the protest had begun declining after the special operation’s start. She attributes this to people being tired in general — they do not see any effect from their actions.

"The authorities are selling a modern eco-friendly complex, but people are already fed up with this topic. People stopped holding pickets, complaining to departments and in social networks.

People are tired: winter, special operation, spring, vegetable gardens. We are trying to resume the activity of residents, but people do not have much enthusiasm. They do not believe in changes," Smolina believes.

As she says, the officials also see this and argue that "everyone should unite" rather than protest in the current situation in the country.

Revived protest. Construction of an ecotechnopark in the village of Sosnovka, Tambov Oblast

What the activists are fighting against: construction of an ecotechnopark — a facility for recycling waste into secondary raw material — in the Sosnovsky District of Tambov Oblast.

According to residents, there is a high level of groundwater, which can be contaminated with sewage waters, affecting residents’ health, at the ecotechnopark’s construction site. The citizens collected more than 700 signatures against the facility and asked Putin not to allow the ecotechnopark’s construction in their district. Soon, one of the activists was injured by unknown people, after which deputies canceled the decision to transfer the land for the ecotechnopark. It would seem that the protest was a success.

But early in February 2022, the authorities decided to hold another public hearing on the ecotechnopark’s construction. Most residents supported the idea. As a result, local deputies still transferred the land for the ecotechnopark.

Local residents continued opposing the landfill’s construction after the special operation started in Ukraine. The administrator of the Sosnovka is not a Dump Community told 7x7 on the condition of anonymity that the military actions in Ukraine had not affected the protest. He explained that activists had stopped keeping the protest community due to the administrator's illness since mid-March, but they had resumed publishing information there in June.

"We do not see any connection between the main regional landfill’s construction and the special operation. We want the fields with unique Tambov black soil to be cultivated, rather than filled with garbage. And all the residents of our village council share this idea," says the environmental activist.

"There is no rift of the protest." Completion of the Krapivinskaya HPP, Kemerovo Oblast

What the activists are fighting against: the authorities decided to complete the Krapivinskaya HPP and signed an agreement with the RusAL Company. They want to create a reservoir 135 km long and 15 km wide, for which they will flood 97 thousand hectares of land.

Local residents said the flooding of rivers would cause the extinction of red book fish species, and sewage waters of metallurgy enterprises would turn the reservoir itself into a large pit. The residents of Kemerovo have launched a petition against the facility’s completion.

The police did not allow 10 environmental activists to attend public hearings on the project, having explained that there was no room in the hall. The law enforcement officers gave them a link to an online broadcast, but it did not work. Some activists could not attend the second hearing in the Krapivinsky District on February 22 either. Two activists were not allowed to attend the third hearing as well under the pretext of a check for drug intoxication. Those residents who were allowed to attend the meetings supported the HPP’s completion.

After the special operation started in Ukraine, the activists complained to the Investigating Committee about their non-admission to the hearings and demanded that the courts declare their results as illegal. By June, the courts had not accepted the appeals, referring to the cases’ nonjurisdiction or shortcomings in the claims. The activists asked the regional court’s head to puzzle out the situation. The HPP’s opponents also complained that they had not been allowed to conduct a public environmental assessment of the facility.

Maxim Andrianov, the head of the Ecology Committee Public Organization in Kemerovo, believes that the special operation in Ukraine did not affect the protest in Kuzbass. Residents hope that the authorities and businessmen will not be able to complete the HPP due to the special operation’s consequences.

"The public hopes that the Krapivinskaya HPP Project will be canceled due to the sanctions [against RusAL’s founder Oleg Deripaska] and the possible lack of funding. There is no rift of the protest because of the special operation," Andrianov noted.