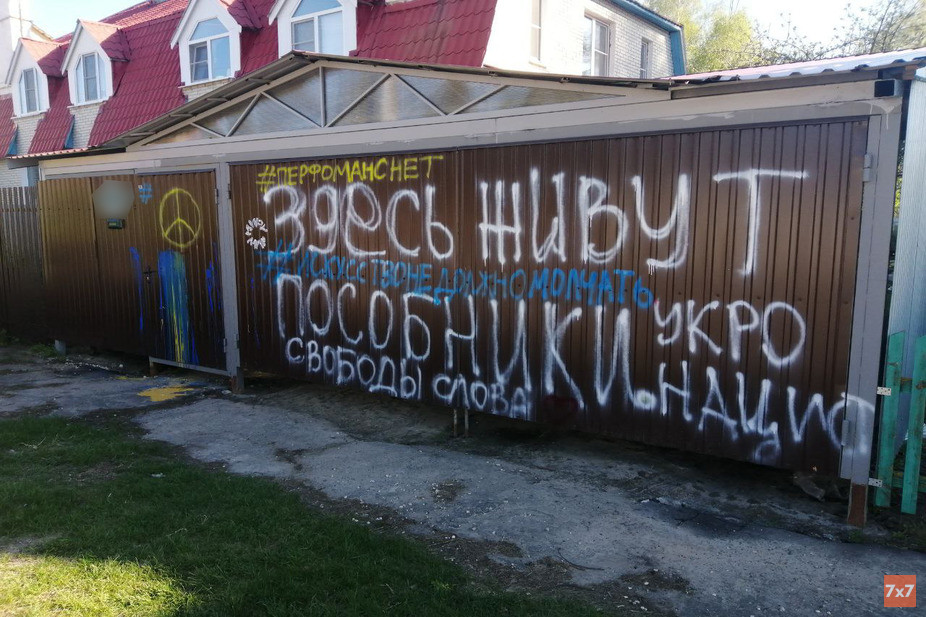 On May 7, artist Vladimir Kuznetsov from Penza depicted the symbols of peace on the gates of the house of 7x7’s correspondent Evgeny Malyshev and his wife Ekaterina, the Takie Dela Media Outlet’s journalist. On April 27, unknown people wrote, "Here live the accomplices of Ukro-nazis" on their gates and drew a Z on their car. Kuznetsov replaced the inscription with, "Here live the accomplices of freedom of speech."

"When independent media are banned under any pretext, art remains the only language that makes you think. We are all in the middle of a scorched earth now, and this is a gesture of support to friends who have remained loyal to their beliefs and are not afraid to express them, no matter what," Kuznetsov explained to 7x7.

The couple complained about the incident to law enforcement agencies. The police are conducting a check. At the end of April, an inscription about "Ukro-nazis" appeared on the door of lawyer Igor Zhulimov from Penza. He helps refugees from Ukraine who were taken to Russia to leave the country.

Activist Vladimir Kuznetsov has often opposed censorship. After the start of the special operation and the blocking of websites for publishing information about Ukraine, he created a photo project about pressure on independent media. His photo showed the man sitting blindfolded and with his mouth sewn shut at a laptop. In December 2021, Kuznetsov presented the Bezymyannye (‘nameless’) Project about how the state was trying to take away the name of independent media by means of declaring them foreign agents.

In August 2021, Kuznetsov held a performance dedicated to the destruction of freedom of speech in Russia and the 15th anniversary of journalist Anna Politkovskaya's murder. He wrapped seven young women in fishing nets, which symbolized independent media. The artist called the action, "The Fisherman and the Dead Fish".