The story of Ivanovo activist Olga Nazarenko, the defendant in Russia's first criminal case for repeated participation in anti-war rallies 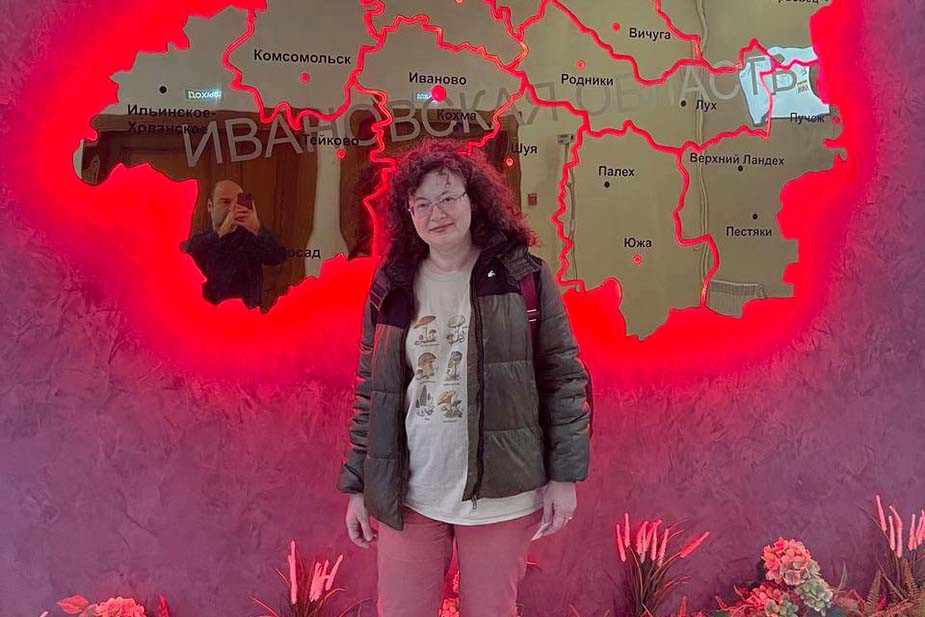 "Well, you should understand, it’s just a job," these words Olga Nazarenko, a teacher at Medical Academy, often heard from police officers when she picketed the streets of her native Ivanovo with anti-war placards. She replied bluntly: "It's a shitty job to detain people for expressing their opinions.” Since the beginning of the special operation in Ukraine, the police have filed five reports of administrative violations against Olga. According to court decisions, she has paid 265,000 rubles (about $4,400) in fines and done more than 200 hours of compulsory labor. In the fall of 2022, Nazarenko became a defendant in two criminal cases: one for “discrediting” the Armed Forces and the other for repeated violation of the rules for organizing or managing public actions. She might go to jail for several years.

Olga Nazarenko, M.D., worked at Ivanovo Medical Academy where she kept a few small A4-size placards in the drawer of her lecture room table. It was convenient, as she didn’t have to go home to pick up placards for her pickets.

On September 20th, as usual, before classes, Olga came to the lecture room. There she found a group of riot police officers, a few people from the Anti-Extremism and Terrorism Center, and an investigator of the local police. They announced that they had a search warrant. Nazarenko's colleagues had to act as witnesses.

Olga managed to send a message to Oskar Cherdzhiev, a lawyer with OVD-Info (an independent media project on human rights and political persecutions in Russia) before the law enforcement officers told her to turn her smartphone to airplane mode. She was informed that a criminal case was opened against her for “discrediting the Armed Forces of the Russian Federation.” Anti-war leaflets she posted downtown about what had happened in the Ukrainian cities of Bucha and Irpen turned out to be the reasons for charges against her.

The investigator began to read the text of the search warrant. There were so many words about a "special operation to maintain peace" that was "consistent with the norms of international law" that the woman couldn’t help herself and laughed.

“I stood and listened and laughed at these clichés and at the way he spoke, so serious and pompous. The investigator asked me, "Are you laughing?" I honestly replied, "Yes." He was very offended that I laughed at the wording of the resolution and that I didn’t treat them and the whole situation with due reverence,” Olga says.

That day, her students went home without classes. After they were done at the classroom, the investigators moved to Olga’s home to continue with their search. They left four hours later with all her picket placards, a flag of Ukraine they found on the balcony, the system unit from her computer, her children's phones, and even cash, hers and her student daughter’s. Though her daughter’s money they later returned.

A month passed, and at 7 a.m. on October 18, officers were back at Olga's apartment. This time they came to charge her under criminal law for repeated violation of the rules for organizing or managing public actions (the so-called “Dadin law”).

They left with more placards, her phone, and another Ukrainian flag from her balcony. Since that day, the activist has been under house arrest.

Olga Nazarenko held her first anti-war picket with a placard that said "No War” on February 22. She had a gut feeling that an armed conflict between Russia and Ukraine was "about to start.” The next day the woman was back on the street with the same placard.

On February 24, she woke up to the news that confirmed that her worst expectations came true. She took her placard to Revolution Square, one of the three main squares in Ivanovo.

“I was in pain and I was outraged. Outraged by the fact of such a full-scale [action]. And I felt pain for Ukraine, for the people who were dying and more would die," she recalls the day the operation began.

Olga wasn’t alone at the square, other people were protesting that day and the days that followed. The police detained all of them.

Olga was arrested when she stood between a policeman and another picket girl. She was charged with an administrative violation for disobedience to the officer. The court sentenced her to 80 hours of community service.

Nazarenko had protested before February 2022. She hung a banner about the Federal Security Service on a railway bridge, recorded a video in support of Navalny, supported political prisoners, and protested against sending Russian troops into Kazakhstan. But she had never before been a defendant in a criminal case.

Anti-war pickets on February 23 and 27 cost her two fines at 75 and 150 thousand rubles (about $3700). For her tweet at another picket quoting Ukrainian writer Lina Kostenko, the court fined her 40 thousand rubles (for “discrediting” the army). Yet Nazarenko continued to picket despite the new draconian laws for “discrediting the Armed Forces of the Russian Federation” and “fakes about the military.”

“I know that nothing is going to change anytime soon. But it doesn’t make me panic. I accept the current situation as a fact," she says. “I keep protesting simply because I see it as my duty, and also because I want those who think the same way to see that there are others like them. And to support my friends in Ukraine. And if it inspires at least some of those who hesitate to join me, that's not a bad thing.

With her placards Olga expresses her position directly, without any ambiguities or asterisks instead of words:

“I tried to be clear and easy to understand. I wanted to be as specific and comprehensible as possible. I don't like Aesopian language.”

In May, police officers came to Olga's house with a search warrant. She was a witness in the case of  Sergey Veselov, a local activist, charged with making anti-war graffiti. They took her phone, her computer, posters, flyers, and a flag of Ukraine.

A new school year began, and on the first day at work, Olga found her laptop missing. It turned out that the computer had been taken by the police the night before because it "could contain materials relevant to the case," a criminal case about discrediting the army.

Three days later, the police detained Nazarenko during a picket as she was protesting against criminal cases for “fakes” about the military. This was her last confrontation with law enforcement before she was charged under the “Dadin” law.

The police did not leave a copy of the documents explaining the seizure of equipment at Medical Academy. But the administration got alarmed by news about Olga's situation.

“Of course, [the search and the seizure of the equipment] worried the management, especially when I made a fuss about it [publicly]," Olga says. “But in general, everyone [at the Academy] sympathized with me. When the search took place, my colleagues were worried if I could continue with my work.”

Olga Nazarenko spent her entire professional life at Medical Academy. She studied there for six years and then worked as a lecturer at the Department of Pharmacology for 24 years.

The only thing the administration asked Olga was not to do any political talk during classes. However, a second criminal case against her forced the rector's office to suspend Olga [our office has a copy of the decision].

“I wouldn't have been suspended if it weren't for the criminal charges against me because with them one can't work in education," she says.

According to the Russian Labor Code, people criminally charged under certain laws (with a threat to the foundations of the constitutional order and the security of the state, peace and security of mankind, and public safety) cannot work as teachers.

Oskar Cherdzhiev, Olga's lawyer, says that formally Academy had grounds to suspend Olga. However, l he believes that this decision was illegal:

“Only a court can find a person guilty, and Olga was punished but not convicted yet; she was not paid any compensation, she was deprived of her livelihood, and her students were deprived of her as a teacher.”

Oskar believes that the Academy administration decided to suspend the teacher after a letter from the Department of Internal Affairs to the rector. This letter is mentioned in the decision about the suspension, but neither the activist nor her lawyer knows what is in it.

Cherdziev supposes that if it were the administration’s initiative to suspend Nazarenko, they would have done so immediately after the searches in September when the charges for discrediting the army were brought against Olga.

“But she worked all right. And what kind of evidence did [the police] expect to find in her office? Her suspension contradicts Article 49 of the Constitution, according to which everyone accused of a crime is presumed innocent until proven guilty," the lawyer says.

Formally, a suspension is not the same as a dismissal. But if Olga is found guilty and then her appeal fails, she is unlikely to come back to work.

The activist is looking for temporary part-time work. And she’d like to return to her job at Academy in the future.

Despite the criminal cases, Olga does not give up.

“It may sound silly or pompous, but the main reason [why I continue with activism] is my conscience and my principles. When I see a clear injustice, especially when it is systemic, I can't accept it. And when I disagree with something, I can’t keep quiet about it. I was brought up on the well-known principle: 'Do what you have to do and accept the consequences,'" she explains.

Even before the armed conflict, Nazarenko wondered if she should leave Russia. She decided to stay:

“The decision is probably irrational. But Russia is my homeland. This is my country, I won't let anyone kick me out of here. I have no less right to this land, if not more, than those who have usurped the power and those who sing along with them. At least I can talk to people here, my position can be heard.

The activist's fate inspired Anna Dello, a local filmmaker, to make a documentary about Olga. She is raising funds for the production on her Telegram channel.

Anna and Olga first met at a rally in support of Alexei Navalny, when after his poisoning the authorities were not allowing doctors to him. Both Anna and Olga were detained by the police at the rally.

“I wanted to make a documentary about Olga for a long time, but I didn't have the resources. I still don't have them, but the situation has compelled me to start with the project now. All I can do is tell Olga’s story so that people will know about her and understand her," Anna says. “She can express her position quite clearly and reasonably in an artistic form [through pickets]. But a documentary is another format for expressing a position, and just as manuscripts do not burn, so it will remain. Olga faces a risk of going to jail, and that is why I’m making a film about her now, even with no funding.”

Olga Nazarenko has help from her friends and other Russian activists who write comments in support and send money to pay fines.

After the searches, she hung a Ukrainian flag on the balcony of her apartment for the fourth time.