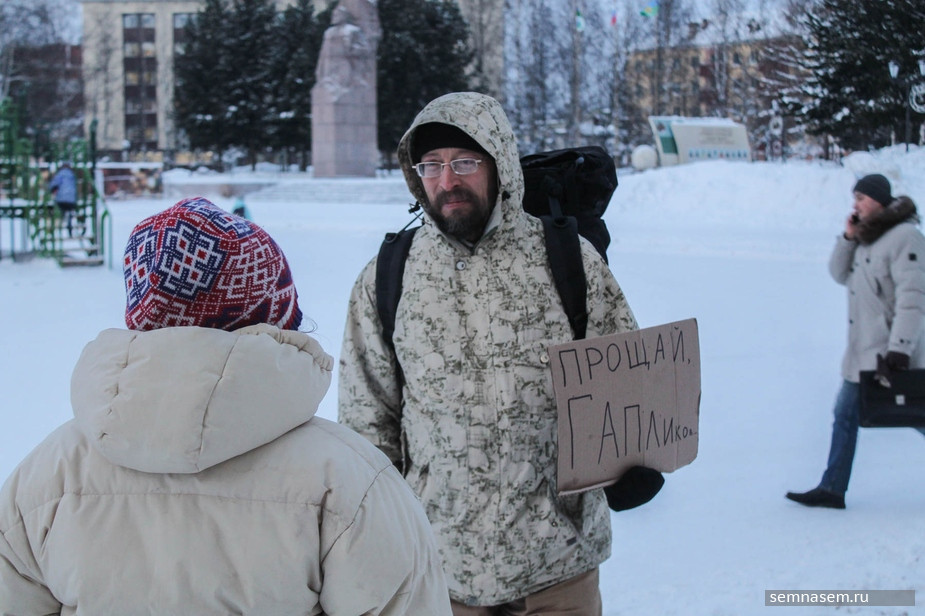 Alexei Semyonov at a picket against ex-head of Komi Sergei Gaplikov in 2020 ("Farewell, Gaplikov")
Photo by Dmitry Stepanovsky

The Syktyvkar City Court has fined activist and eco-point owner Alexei Semyonov for 10 thousand rubles for a picket at the administration building against the construction of a landfill in the village of Izhma. According to the social activist, he will not be able to pay the fine, since he has spent his money on organizing an eco-point and now lives on his wife's pension. Alexei Semyonov told 7x7 about this.

The court has fined Alexei Semyonov for the violation of arranging a public event (Part 2 of Article 20.2 of the Administrative Code of the Russian Federation). The activist himself did not attend the court hearing — the fine was imposed before an attorney-in-fact.

“I held a picket with a poster for the first time in Stefanovskaya Square on September 17, on the first day of the elections. My poster had three images. The first is an excerpt from Novyi Sever [‘New North’, a newspaper], where [the head of the republic] Vladimir Uyba promised not to allow constructing the landfill during the election campaign in 2020. The second is an excerpt from BNK [a news agency], where Uyba, already being a governor, approved the construction of a waste plant. And the third is a picture of a concentration camp”, Semyonov said.

According to the activist, on September 17, the police only took explanations for the picket from him, they did not seize the poster. The eco-activist held a picket with the same billboard at the administration building on December 14. Security forces also took explanations from him and did not detain him. Semyonov received a lawsuit summons three days before the hearing.

The social activist said that he would ask Novaya Gazeta’s journalist Ilya Azar, who launched a website in 2020 to raise money for fines for participants of one-person pickets, for help in fundraising. According to Semyonov, he has spent all his money on creating an eco-point for receiving recyclables in Izhma and now lives on his wife's pension.

The former Minister of Natural Resources and Environmental Protection of Komi Roman Polshvedkin stated in March 2020 that the construction of the landfill was going to continue in 2020. It became known in November 2021 that the Moscow Aviapromstroy LLC Company plans to do construction work.