In Syktyvkar, a pensioner holds a one-person picket in support of Memorial* 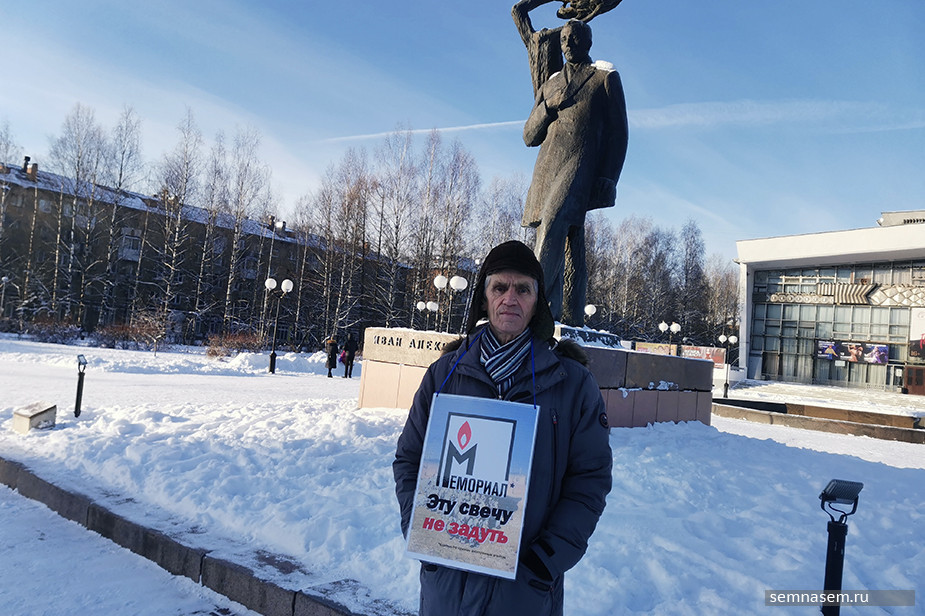 Pensioner Sergei Kharyukov held a one-person picket in support of International Memorial* at the monument to Ivan Kuratov, the founder of Komi literature, on the Theater Square in Syktyvkar on November 14. A few days before, a petition that demands stopping the historical and educational organization’s annihilation was created on Change.org; the petition was signed by more than 7 thousand people at the time of publication. Kharyukov told 7x7 about the picket.

Sergei Kharyukov went to the Theater Square with a poster, "This candle cannot be blown out." The pensioner told 7x7’s correspondent that he himself was engaged in the history of Soviet repressions towards his relatives and therefore had decided to speak in support of Memorial*.

"I believe that Memorial*, particularly as a historical and educational organization, has become an eyesore to authorities. We are going with solid step to the year 37 thanks to such laws. It has actually come already, just not in such a violent form: the Prosecutor General's Office sends a request for the annihilation," Kharyukov said.

The activist noted that International Memorial* was going to continue working in one form or another, despite everything, even if it was liquidated as a legal entity.

"Every year, it becomes more and more difficult for them to work. I feel like it started in 2011. Since then, the authorities have begun toughening laws up, closing archives, and now they indict for the anti-mask mandate. Not many people know about Memorial* anyway, there are fewer and fewer people every year. But it is necessary to recall those dark times, because history is cyclical," added Sergei Kharyukov.

The action was held without police intervention.

On November 11, the Prosecutor General's Office filed an administrative lawsuit with the Supreme Court for the annihilation of the International Memorial Historical and Educational Society’s* non-profit organizations labeled as foreign agents. The claim of the Prosecutor General's Office is based on the fact that the NPO does not comply with the legislation on foreign agents by not labeling its materials as appropriate.