"Those were different times, and I had hope." Activist Andrei Borovikov from Arkhangelsk, convicted because of Rammstein’s music video a year ago, speaking on the special operation and emigration 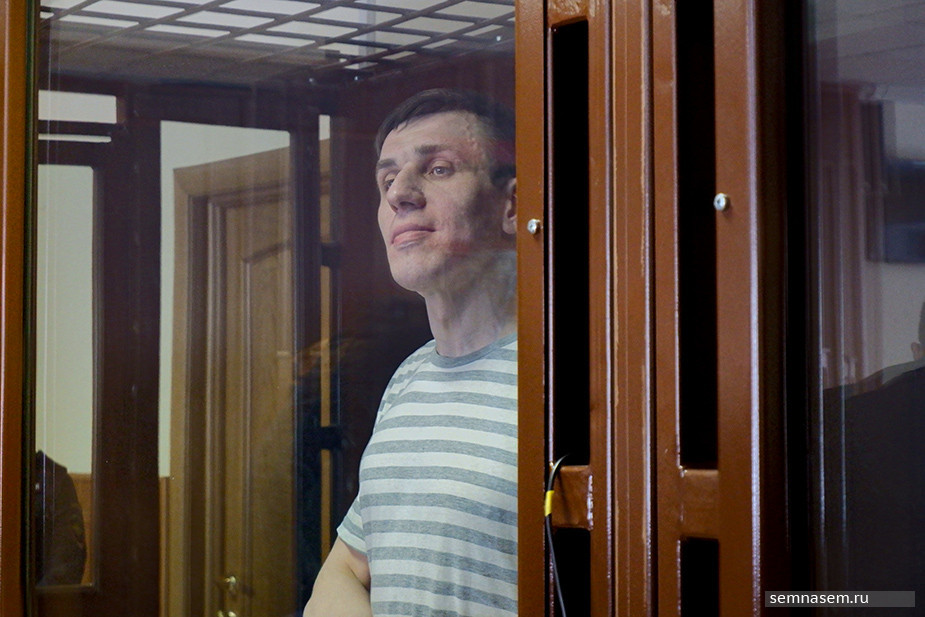 Andrei Borovikov at the appeal hearing on March 15, 2022
Photo by Valery Dyomin

Convicted activist Andrei Borovikov from Arkhangelsk has been in prison for a year. The court sentenced him to 2.5 years in a general regime penal colony for distributing pornography because he had published the Pussy music video by the German band Rammstein on vk.com. Borovikov is one quarter Ukrainian. After the special operation began, he felt disgusted and angry. Read 7x7’s interview about how convicts learn about the events in the world and what Andrei thinks about the political situation in Russia a year later, being on the other side of the fence.

Andrei Borovikov is an activist and former coordinator of Navalny's headquarters (the organization is recognized as extremist and banned in the Russian Federation) from Arkhangelsk. He repeatedly participated in uncoordinated rallies and pickets against the construction of a landfill at Shies, opposed the retirement-age increase.

In early September 2020, the court fined Borovikov for 4 thousand rubles under Article 6.13 of the Administrative Code of the Russian Federation (Promoting of Drugs) for publishing the Legalize music video by Detsl on vk.com. In the autumn of 2020, the activist's apartment was searched, and he was interrogated in the case of the distribution of pornography on vk.com. The investigator handed him a court order on a search in the case of the distribution of pornography on the Internet (paragraph "b" of Part 3 of Article 242 of the Criminal Code). The document stated that the case had been initiated back in March 2020 because of a pornographic video allegedly posted on the page "Andrei Borovikov" on vk.com.

On April 29, the Lomonosovsky District Court of Arkhangelsk sentenced Borovikov to 2.5 years in a general regime penal colony. He was accused of distributing pornography for publishing the Pussy music video by the German band Rammstein on vk.com in 2014. Richard Kruspe, the band's guitarist, spoke in support of the activist. He stated that he had been shocked by the cruelty of the sentence. According to him, the band has always advocated freedom in the arts, which guarantees the fundamental rights for everyone.

In July 2021, the regional court reduced the term by three months. However, the Court of Appeal found violations when considering the appeal, which is why it was remanded for reconsideration. The case was considered again from the end of March till the beginning of April 2022. As a result, the Arkhangelsk Regional Court left the verdict unchanged — two years and three months in a general regime penal colony.

In the summer, Andrei Borovikov and his wife Darya had a son, his name is Stepan. Andrei learned about this from Darya Borovikova's telegram a few days later.

Andrei is currently in Penal Colony 7 in Arkhangelsk.

Andrei, how did you find out that Russia had launched a special operation in Ukraine?

From propaganda news that is constantly broadcast in our colony. Russia-24, Channel One, Solovyov’s news announced this, naturally. I watched the "humorous issue" of Putin being persuaded to recognize the LDPR [he means the meeting of the Security Council]. And, of course, I was told about it on the phone, I keep in touch with my loved ones. I regularly received Novaya Gazeta when it was still allowed. Albeit belatedly, but I learned this from the point of view of the truth, and not from the point of view of propaganda.

What did you feel about it?

I was disgusted. Because no one could have imagined it literally 10 years ago. We used to joke that there would never be a conflict with Ukraine no matter what, because we were one people. I am one quarter Ukrainian, so this is a personal issue for me.

Do you have any other sources of information besides TV, Novaya Gazeta and talking to your loved ones?

I receive a lot of emails — an average of 50 per month. Each one reports some news, although it comes late.

What do you think about what is happening in Russia now?

I am trying to find appropriate words. Totalitarianism, the most undiluted, canonical one, is unfolding step by step in our country. I heard today [the interview with Andrei was recorded on April 23] that [Vladimir] Kara-Murza was sent to a detention facility [on April 22, the Basmanny District Court of Moscow arrested the oppositionist and journalist until June 12 under the article about fakes], a criminal case was opened, as well as against many of my friends in Arkhangelsk. Many have fled the country. What can you feel? Anger, but not exhaustion.

It bothers me a little that I get letters of people saying how desperate they are and how awful everything is. I find it strange that this situation makes them feel so. It makes me only angry, angry and willing to act. I understand that I am a little out of touch with reality. Perhaps, if I were free, I would feel the same as they do.

Is it okay to discuss the special operation in a colony? And how do the convicts generally react to what is happening?

The colony is like a sector of society. There are both opponents and supporters here. We are discussing [the special operation], of course, people are interested in it, it affects their lives even in the colony. Especially, the prices in stores affected the average cost of packages and parcels from their loved ones. And most of the people here are not very rich.

I feel that there are more people who absolutely do not care. We must understand that people here do not live in accordance with such values. Only some go into politics, support or reject this situation. The rest say, "I do not care", "Roll on the day when I get free and go back to stealing."

Before you got to the colony, you used to be an activist and the coordinator of Navalny's headquarters*. Please tell us how you would behave at large under present conditions.

I have thought about it a lot. Probably, I would have done the same thing as before, and perhaps I would have gone to jail down under a tougher article. Anything is possible. Who knows what it would really be like? Would I be alive at all? Who knows...

In March, the court was considering the appeal in your case and there was a possibility for you to be released. If this had happened, would you have left Russia immediately, or would you have continued your opposition activities here for some time?

On April 29, 2021, when I was tried, I counted on the support of progressive society, the European community, world leaders, but the time has changed. [It is] time for isolation, totalitarianism, direct confrontation with European countries. The leaders of European countries have no time for political prisoners, and human rights organizations have absolutely no standing in Russia. Humanitarian aid can rather be provided directly in prison. So, If I had known that everything would be exactly as it is now in Russia, there would have been no point in staying in the country. I would have left. But then [a year ago] there was a different time and a different situation. And I had hope.

Now I understand those people who left the country. They did the right thing.

Do you regret that you did not leave when you could?

Regret it or not, would that change anything? You see, I try to be more philosophical about it — about time and things done in the past. Sometimes I regret when I miss my family, when I see photos of my son and wife. I think I would have left with them and been there for them. And then, when I receive letters from friends, strangers who support me, even admire my act for some reason, I think that it might be good that I stayed. My opinion changes often. But this is just an opinion, and the thing has already been done.

How do you see your and your family's future after you get out of jail in the country that has changed so much within a year?

There are thousands of political prisoners already, Alexei [Navalny] is in prison. I will not be able to walk out on them; I will continue my activities, one way or another. I cannot just leave them here behind the fence, hide and do nothing to help. It is too personal for me. I understand them like no one else. I am in their shoes, and they are in mine.

What would you like to do first when you get out of the colony?

I will hug my son; I will hold him for the first time. I will kiss my wife. Such simple family values are what I miss.

Do you have anything to say to Rammstein’s frontman Till Lindemann?

Yes, I do. I feel very sorry that his desire for comfort and money defeated his rebellious spirit, which he used to have, judging by the interviews that I read and the art he used to make. But I am not hurt. Whatever! It was just an excuse to open a criminal case against me. If not Rammstein, then something else. It does not mean that I would not shake his hand.

If I ever meet Till, I will say hello.

What would you like to say to other activists in Arkhangelsk? Many of them are either charged with criminal articles or have left.

I would like to tell them that they are real heroes. After my criminal case, after I went to prison last year, I did not expect such a degree of protest in the city. And the fact that, despite this [my sentence], they will continue their activities, one way or another.

I admire both those who left and even more those who stayed. Anyway, hold on, my friends, I love you.