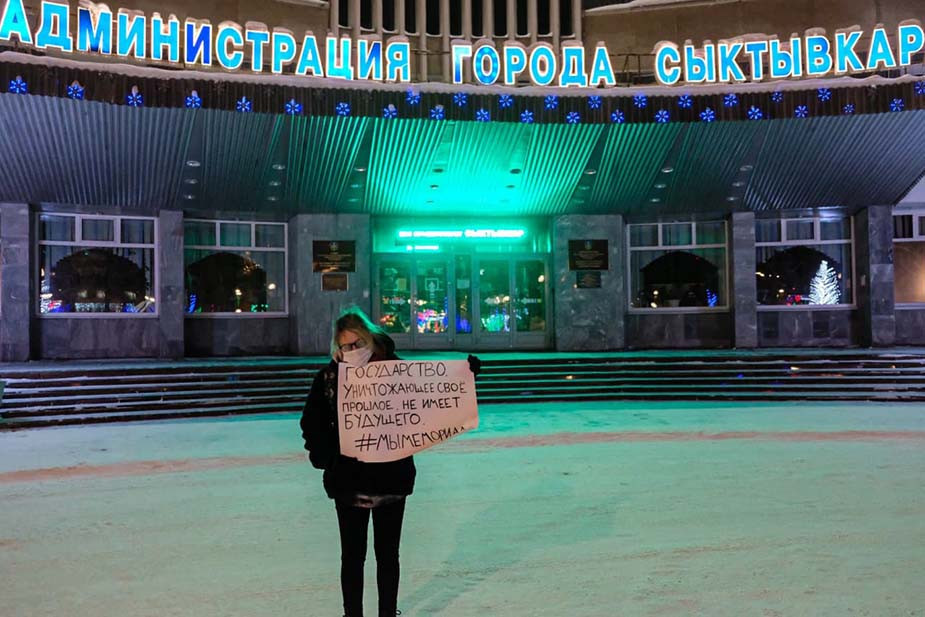 Picket in support of Memorial* in Syktyvkar. Source: t.me/mikhailovteam/189

Members of the Communist Party faction in the Komi State Council have urged the Prosecutor General's Office of Russia to drop the suits on International Memorial’s* annihilation. Earlier, the Supreme Court annihilated the organization on the agency’s claim. The communists consider this decision to be "deeply wrong." Viktor Vorobyov, the head of the Communist Party faction in the Republican State Council, published the deputies’ statement in the Telegram channel.

The communists noted in the statement that two dozen violations of the "absurd and confusing" requirements of the law on foreign agents on labeling distributed content had become the formal reason for Memorial’s* annihilation. At the same time, they believe that the action against the organization is actually part of an "undeclared war of the state against civil society in Russia, which has been going on for several years."

Including on the day of Memorial’s* annihilation, on December 28, an action in support of the organization was held in Syktyvkar. Lina Barabash and Georgy Smirnov, members of the team of Communist Party’s deputy Oleg Mikhailov, went to the buildings of the city administration and the republican prosecutor's office. Teacher and activist Olga Nazarenko from Ivanovo held a similar action. In St. Petersburg, social activists laid flowers at the Solovetsky Stone (a monument to the victims of political repression in the USSR) and stood up with posters in support of Memorial*.

Representatives of the US and the European Union have disapproved the organization’s annihilation.

International Memorial* is a network of organizations including regional branches in Russia, the Memorial Human Rights Center*, offices in Germany, Italy, France, the Czech Republic, and Ukraine. The structure of International Memorial* in Moscow includes an archive, a museum, a library and a public space. The organization was repeatedly fined for the lack of the foreign agent label.

On December 28, the Supreme Court in Moscow sustained the Prosecutor General's Office’s claim on International Memorial’s* annihilation. The agency considered that the organization had repeatedly violated the law on foreign agents by releasing materials without labeling them. Memorial’s* representatives are going to appeal this decision.