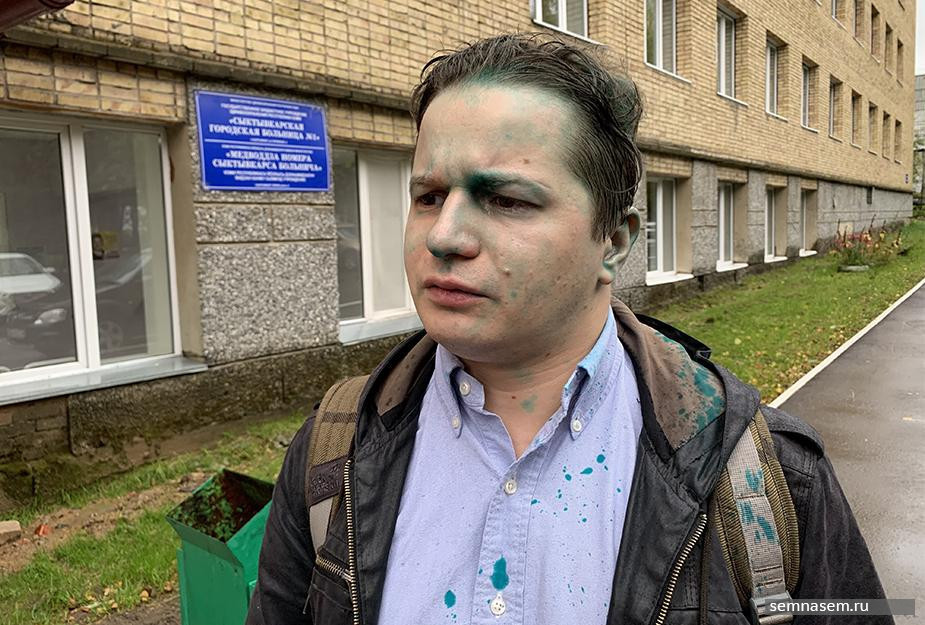 Viktor Vorobyov after being attacked
Photo by Maxim Polyakov

The Prosecutor General's Office of the Russian Federation demanded that their colleagues in Komi check the effectiveness of the investigation into the criminal case of the attack on local human rights advocate and deputy Viktor Vorobyov. In September 2020, two unknown people sprayed brilliant green in his face before the elections to the republican parliament. The case was initiated only after deputies from four regions appealed to the prosecutor's office. The politician told 7x7 about it.

Oleg Mikhailov, a deputy of the State Duma and the head of the Communist Party in Komi, appealed to the Prosecutor General's Office of Russia and asked to check the effectiveness of the work of local investigators in the case of the attack on Viktor Vorobyov. In response to the politician’s statement (7x7 has a copy), the department instructed the prosecutor of the republic to organize a "full, comprehensive and objective" check of what was happening.

"The extension of the investigation’s period for more than a year is possible only through the central office of the Investigating Committee. And no one wants to give such deplorable results of work to Alexander Bastrykin [the head of the department]. Therefore, the Investigating Committee uses a simple trick: it illegally suspends the investigation, and then cancels the suspension by the decision of department's head, after which the deadlines are reset and there is no need to show the investigation's provisional results in Moscow," Vorobyov explained.

The politician considers it to be possible that the  investigation's effectiveness  was influenced by his transition to the Komi State Council, as well as Oleg Mikhailov’s election as a deputy of the State Duma.

Unknown people sprayed brilliant green in Viktor Vorobyov’s face on the day of the elections to the Komi State Council, September 13. It happened as he was leaving the Syktyvkar City Court’s building. His action against the Territorial Electoral Commission (TEC) on not recognizing him as the commission’s member in a consultative capacity was considered there. The injured person claimed that in addition to him, only the judge, the secretary, the TEC’s chairman and the chief assistant prosecutor had known when the hearing had been held. After the attack, Vorobyov was diagnosed with a burn of both eyes.

He asked the police to open a criminal case. However, this was not done. Deputies of the Moscow City Duma, the Legislative Assembly of St. Petersburg, the Komi State Council and the Pskov Regional Assembly demanded that the Komi prosecutor take personal control of the investigation into the attack on Vorobyov and give the audit materials to the regional Investigating Committee. As a result, the police opened a case of an attack on a social activist under the article on slight bodily injury (Part 2 of Article 115 of the Criminal Code). Later, the case was transferred to the Investigating Committee.