In Murmansk, activists have started a flash mob in support of Violetta Grudina, who was committed to a hospital 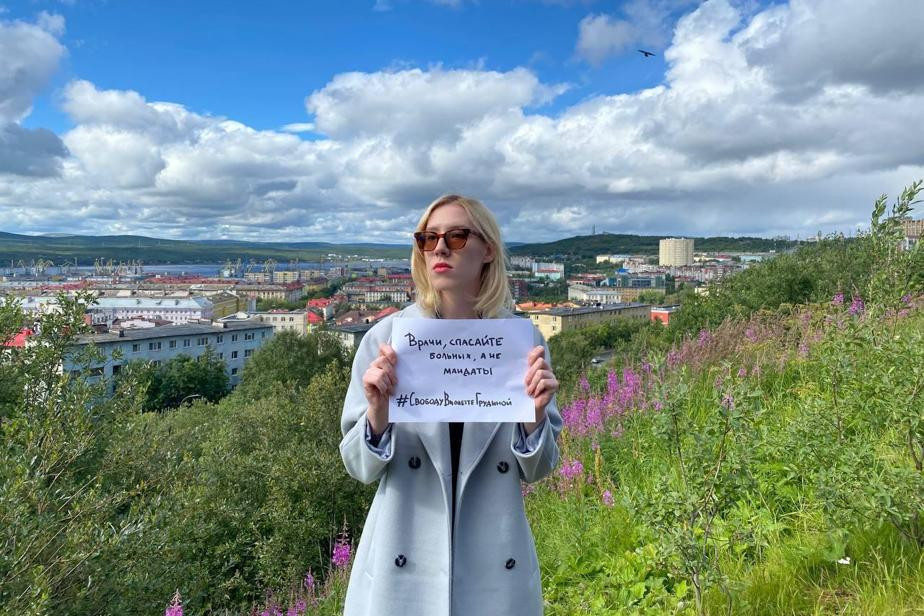 The team of ex-coordinator of Navalny's headquarters* in Murmansk Violetta Grudina has launched a flash mob in social networks to support her. Grudina's supporters believe that the activist is being under political pressure because of her intention to participate in the elections to the Murmansk City Council. The Grudina Napishet (‘Grudina will report’) Telegram Channel reports this.

On July 9, the police of Murmansk opened a criminal case against Violetta Grudina for violating sanitation and epidemiological norms (Part 1 of Article 236 of the Criminal Code of the Russian Federation). She allegedly violated the stay-at-home order by going outside to distribute leaflets with information about her nomination to the City Council on July 5 — a week and a half after she got her positive test result for COVID-19.

On July 14, the Oktyabrsky District Court sustained Rospotrebnadzor’s (the Russian Federal State Agency for Health and Consumer Rights) claim to commit Grudina to a hospital, despite her providing a negative infection test during the court hearings.

Violetta Grudina stated in her Telegram channel that before she was admitted to a COVID-19 hospital, a CT scan showed a 25-percent lung damage and pneumonia. However, she doubts the diagnosis: when she was committed to a hospital, she had a negative test for coronavirus and there were no obvious signs of the disease. The young woman applied for familiarization with original medical documents about her health condition. She also plans to demand changing a chief doctor.

"The actions of the [COVID-19 hospital’s] doctors up top towards me are a crime: illegal restraint, violation of sanitary norms and rules, abuse of office, forgery in office, and neglect. How can you trust doctors who can concoct a diagnosis?" said Grudina.

Supporters of the ex-coordinator of Alexei Navalny’s headquarters* in Murmansk are sure that the authorities do not want to let Grudina run for the City Council. The team wants to spread information about the "persecution of independent politicians and punitive medicine in Murmansk" as much as possible. Therefore, they have started a flash mob in support of the young woman with the hashtag #СвободуВиолеттеГрудиной (‘set Violetta Grudina free’).

Violetta Grudina is a well-known activist in Murmansk Oblast and the former head of Alexei Navalny’s headquarters*. Since 2017, she has organized a rally of the politician’s supporters, participated in rallies against the retirement-age increase, in support of political prisoners, against amendments to the Constitution of Russia. The police would detain the activist and search her apartment because of her political activity. Courts would fine Grudina, arrest her, and block her bank accounts. Before the unagreed rallies in support of Navalny on April 21, unknown people put up leaflets with Grudina’s contact details and calls to "protect the city from this evil" in the entrance hall of her house. When she was in the building of the former Navalny’s headquarters*, unknown people fired at the windows.