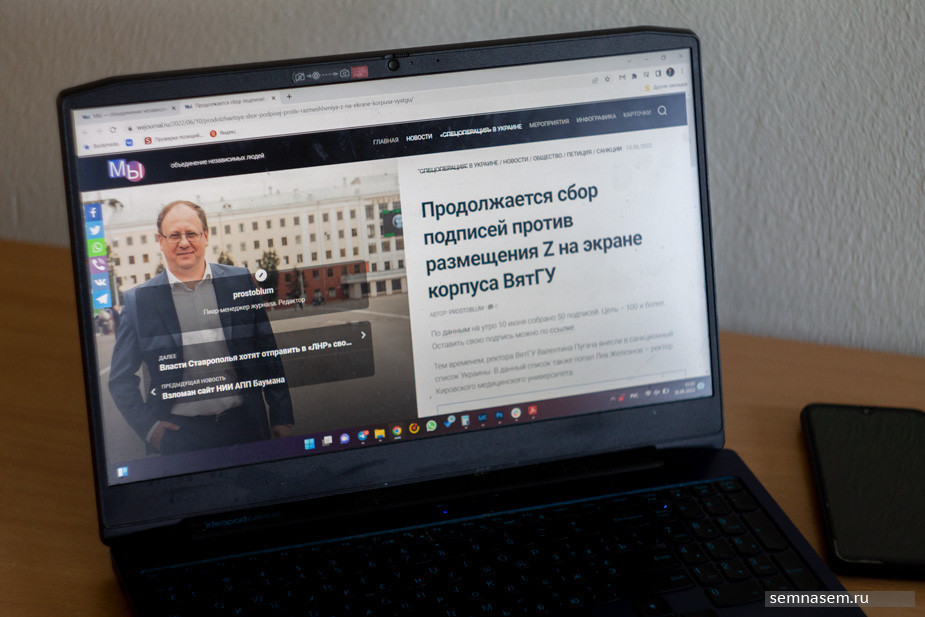 In the spring of 2022, the Federal Service for Supervision in the Sphere of Telecom, Information Technologies and Mass Communications (Roskomnadzor) blocked more than 30 websites of independent Russian-language media covering the special operation in Ukraine. Some of them had to close. A group of friends from Kirov opened their own media outlet, My (‘we’), in response to state censorship. Its employees live in Russia, write about fellow countrymen killed in action, repression, and local activism. Their website is regularly hacked because of this. Read 7x7’s article to learn how to open a media outlet without journalists in the team and why there will be more media outlets like this in the future.

The subjects’ names have been changed at their request and for their safety.

All loved ones watch TV

"Pain, hatred, fear." This is how student Alyona from Kirov remembers the morning of February 24, 2022. A week before the hostilities started in Ukraine, she told her friends that "there was going to be [Roskomnadzor]." The young woman went to her friends not to be alone with her anxiety the day before.

“I woke up before everyone else, opened Telegram, and saw terrifying shots from Kiev, Odessa, Kharkiv, and other cities of Ukraine. As soon as my friends got up, I said with tears in my eyes and a lump in my throat that [Roskomnadzor] had begun. But I did not expect to hear them excuse what was happening, talk about ‘eight years’, the heroic rescue of Russians in the Donbass, and reason ‘where the attack was being prepared from.’ That day, I realized that we had passed the bifurcation point, that day was the beginning of a new era, the beginning of the end of Putin’s regime.”

Alyona is 18. Her relatives work in law enforcement agencies. Her mother supports the United Russia Party.

“All my loved ones watch TV, are subject to propaganda. Coming home and hearing talks about ‘Nazis in Ukraine’, ‘clown [Vladimir] Zelensky’ is ‘a lot of fun’. When I spoke out against [Roskomnadzor], my relatives called me a Nazi and a follower of Stepan Bandera, who organized the nationalist movement in Western Ukraine.”

In the first weeks of the special operation, Alyona volunteered for the OVD-Info Project and helped an independent candidate to participate in the elections. She only discussed the events in Ukraine with her friends who share her opinion.

In mid-April, one of her friends invited the young woman to join the team of the new Kirov media, My; the project appeared in response to the state media propaganda. Alyona agreed immediately.

“The concept of online media was born spontaneously on March 12”, says Andrei, one of the founders of My. That day, he and his friends gathered in the apartment of one of them to discuss the events in Ukraine and think about what they could do to weaken the influence of Russian propaganda.

“Our relatives and the older generation do not understand what is happening not only in their country, but also in the neighboring one they used to call fraternal for so long. We decided that we could create an anti-war news source.”

The friends wanted to "go to the federal level immediately" — to write about Ukraine. But they realized that the competition in this niche was too stiff, and it made no sense to retell other people's news or release information without checking. Then they switched to the events in Kirov Oblast, which are connected to Ukraine and an alternative agenda: activists, administrative and criminal cases, civil society.

"There are very few media outlets like ours in Vyatka — only the Echo of Moscow in Kirov, which became the Echo of Kirov. Basically, journalists tell the news one-sidedly. They do not write about political activists and repression at all. And people do not know what is going on at their own place," Andrei explained.

There are six people in My’s team: an ecologist, a historian, a political scientist, a sports coach, and two lawyers. Two of them study at the university, the rest work in non-media companies. There is no clear editorial structure in the team — everyone does what they can do best. Andrei and Alyona write texts for the website and Telegram channel, Andrei is also responsible for the team’s cybersecurity, and Alyona, for the media outlet’s PR.

My has volunteers who help collect information and put up stickers with QR codes around Kirov — they lead to a website page with a list of soldiers from Kirov Oblast killed in Ukraine.

“When people see that a guy from their village died in Ukraine, it makes (at least a little) many people think that this is happening here, nearby, rather than somewhere across the pond, ‘wherever they are’,” Andrei believes.

Share links to My’s texts appear in Kirov Telegram channels, opposition chats. But not only like-minded people see them — the media outlet’s website has been hacked by those who do not like the media’s subject several times.

106 hacking attempts after an article

As soon as the first share links to My’s texts appeared in Kirov chats, unknown people tried to hack the media outlet’s website. The editors did not pay attention to this until they had to deal with a massive attack after publishing articles about Richard Rose’s and Maria Ponomarenko’s criminal cases.

Richard Rose is a political activist from Kirov. He and his wife became defendants in a criminal case on fakes about the Russian army after reposting materials about the Ukrainian city of Bucha.

Maria Ponomarenko from Barnaul worked for the RusNews Online Media Outlet and was one of the administrators of the Tsenzury Net (‘no censorship’) Telegram Channel. She is accused of spreading fakes because of a post on the channel about a drama theater in Mariupol. Ponomarenko is taken into custody in a detention facility in Kirov.

My’s editorial board counted 106 hacking attempts after the publication about Maria Ponomarenko. They began on the night of June 2 and lasted almost a day.

“My’s website blocks attempts to log in under basic logins like admin. On the weekend in honor of Russia Day, it was shut down several times within an hour, but then survived the hacks. We do not take any special protection measures. We used to suspect pro-government activists who are not related to law enforcement agencies of the attacks. But 106 hacking attempts made us wonder if one can have 106 different IP addresses,” Andrei said.

The Kirov media outlet’s employees work under pseudonyms, often change passwords for their own accounts, and do not tell anyone what they do. After the special operation began, Alyona realized that she could not openly talk about her attitude to the events at the university, because they were "trying to silence her and not get into politics." She fears that her cooperation with My will lead to criminal prosecution,

The team knows that it will not be able to work anonymously for a long time.

"We are all aware of the risks and are preparing to emigrate just in case," says Alyona. She adds, "I do not earn my own money to move. I am a university student, and I want to stay in my country to change it for the better."

The attacks on the website and the risk of repression after deanonymization do not stop My’s editorial team. They want to launch a fundraiser for big materials’ preparation (because all the work has to be paid from personal budgets so far), are planning to create a website through which people can write letters to political prisoners in Kirov. For example, Moscow State University’s postgraduate Azat Miftakhov, who is serving his sentence in Penal Colony 17 in Kirov.

“The media environment in Russia changed after February 24: large independent media outlets have been closed or blocked, so there will be more independent media like My. They will be created by the same groups of young people like ours. By those who do not have families and obligations to them yet and have the opportunity to plunge into this,” Andrei believes.

Alyona calls My a unique media for Kirov Oblast. She and her friends are ready to help like-minded people launch My’s branches in their regions.

“We are thinking how to keep anonymity between authors from other cities and us,” said Andrei. “But this is just an idea, we are not second-guessing.”