A tale of Shies. The station’s defenders have set up a museum of the history of fighting against the construction of a landfill 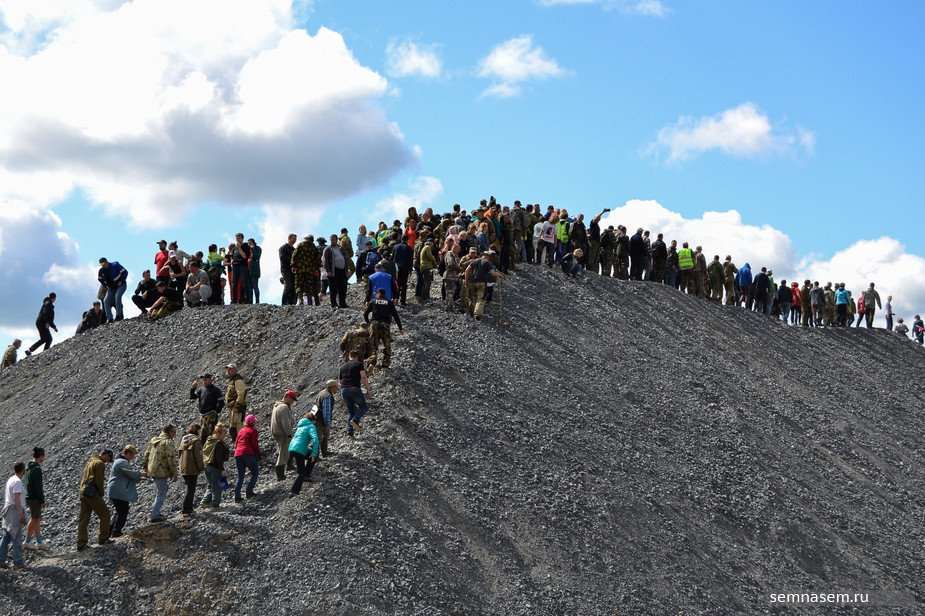 Defenders of the Shies station
Photo by Karina Zabolotnaya

The protest against the construction of a landfill at the Shies station in Arkhangelsk Oblast is one of the vivid stories of the civil society’s fight against injustice in modern Russia. The two-year confrontation between citizens and the authorities and business lead to the resignation of two regions’ heads and the construction's renunciation, and the experience of Shies’ defenders is used by activists from other regions. Social activists decided to perpetuate the memory of the protest and opened a museum of the history of fighting against the construction of a landfill on November 5. Read 7x7’s review to learn what exhibits are presented in the museum, how people came up with the idea of setting it up, and why it is necessary to preserve the memory of the protest.

From a fabric toy to initiating a case

Public activists opened the museum or the exhibition (there is no consensus among activists on how to call it) about the protest at Shies in the Community Center of the village of Urdoma on November 5. It is located in the Lensky District of Arkhangelsk Oblast, 30 km from the Shies station.

The permanent exhibition shows how the life of activists at the posts was organized. Social activists put them up for a permanent watch at Shies. The exhibits include the Leningrad tent camp, the Kostyor (‘bonfire’), Gora (‘mountain”) and Banya (‘sauna’) posts, the Shlagbaum (‘turnpike’) post put up in Urdoma and the Madmas crossing post, which was located on the side of the Komi Republic adjacent to Shies.

The museum's visitors can see badges, mugs, T-shirts with symbols of the protest at Shies, flags, handmade dolls of protesters. The documents of those events include the originals of cases initiated by the police against activists and the old timetable of trains passing by Shies. One of the most striking exhibits is a green-yellow vest raincoat, used by activists, who were on duty at the Gora post on a hill made of stone chippings, to hide from the weather. The Communists Party’s Komi branch handed its travelling photo exhibition about the protests at Shies over to the museum for its opening.

The museum is free-to-enter. Call the Urdoma Community Center in advance to go there.

Thoughts about the museum during the protest

Activist Anna Shekalova told 7x7 that the defenders of Shies had had their first thoughts about setting up a museum back in 2019 — at the height of the protests. She claims that the protesters received letters of support and souvenirs from all over Russia then. According to her, the activists had no doubts about their victory and the future of the museum, so they began handing received parcels and some household items from Shies over to Urdoma to keep them.

The social activists returned to the idea of setting up a museum in February 2021. At that time, officials had already abandoned the landfill project, and the investor began the territory’s reclamation and demolished the Leningrad tent camp. Unknown people destroyed the Banya, Krepost’ (‘fortress’) and Kostyor posts soon.

Thereafter, Shekalova suggested setting up a museum of Shies to activist Ekaterina Yaroshenko. Then the social activist, together with her associate Vera Berezhnaya, approached Elena Smirnova, then-recent acting head of the Urdoma, with a proposal to open a museum or exhibition. The official advised to equip a site in the community center, the director of which provided the room to the activists.

"People would bring there anything: badges, letters, flags, and so on. I brought the surviving part of a video camera smashed by private security guards in August 2019. I also brought two wooden figurines, carved by an activist who was on a night watch at the Kostyor post. At my request, others also handed some things over, for example, a scarf, a hat and the first, already torn flags. We started collecting all these things and handed them over to Igor Yaroshenko, who brought the exhibits to the museum," Anna Shekalova noted. 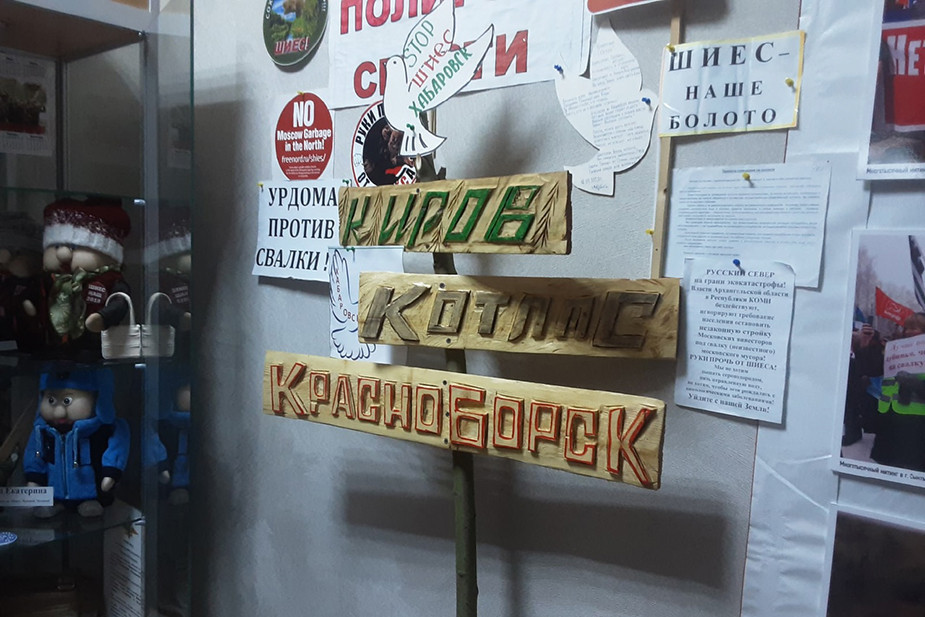 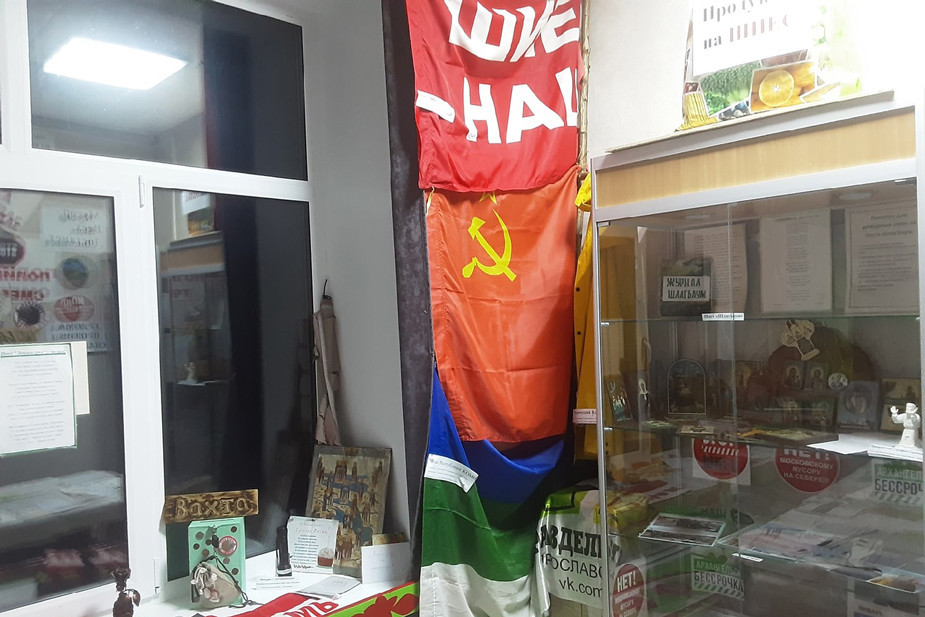 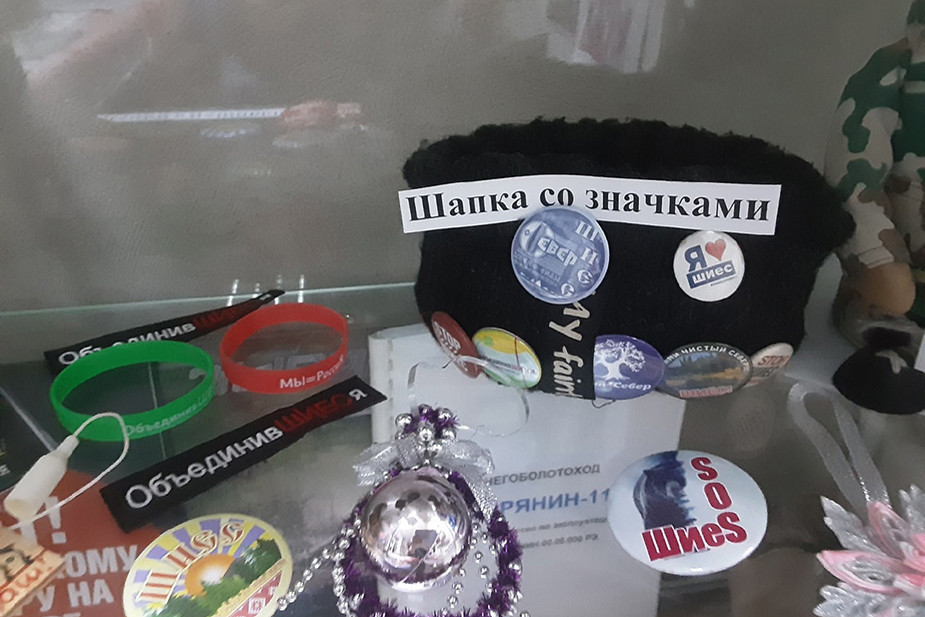 A hat with badges

Activist Marina Dzyuba told 7x7 that the protesters had initially wanted to set up a museum on the territory of Shies. But they abandoned this idea after the destruction of the activists' posts in February 2021. As a result, Dzyuba opened a kind of "exhibition" in her summer kitchen. The woman already had several "exhibits" from Shies at that time: a sheepskin coat in which she helped restore the destroyed Kostyor post, a bag used to carry food to activists, badges, materials of cases initiated by the police against the defenders of the station.

"In the summer, children came to see the exhibition in our house, and I figured out how to tell them about those events. Once, 13 activists were celebrating the New Year at Shies. Everyone was born in different months, so they became the 12 months with Santa Claus. His staff was snatched from him to be buried, but the defenders prevented that. Next, I explained the details using the dolls of the defenders. In the end, the grandmothers said that their grandchildren could not sit for 10 minutes listening to a fairy tale, but they listened to the tale of Shies open-mouthed," Dzyuba said.

When autumn came, Marina Dzyuba took the exhibits inside, and later moved them to a room allocated in the community center. After arranging the exhibition, the activist reported this in social networks. According to the woman, acquaintances began to call her and offer new exhibits to the museum. For example, the callers offered bringing kozuli - traditional Arkhangelsk gingerbread in the form of figurines.

According to Marina Dzyuba, from 7 to 10 thousand people visited Shies during the entire protest. She is sure that the museum is interesting to people, regardless of how much they are immersed in the topic of protests at the station. The activist believes that it is impossible to tell about all the defenders of Shies, but thanks to their personal belongings it is possible to convey the history and power of protest.

Marina Dzyuba does not consider herself the exhibition’s creator or curator. She wants activists to conduct joint tours of the museum.