"Putin requires only a liter." A resident of Penza came up with a way to make disappearing slogans for pickets 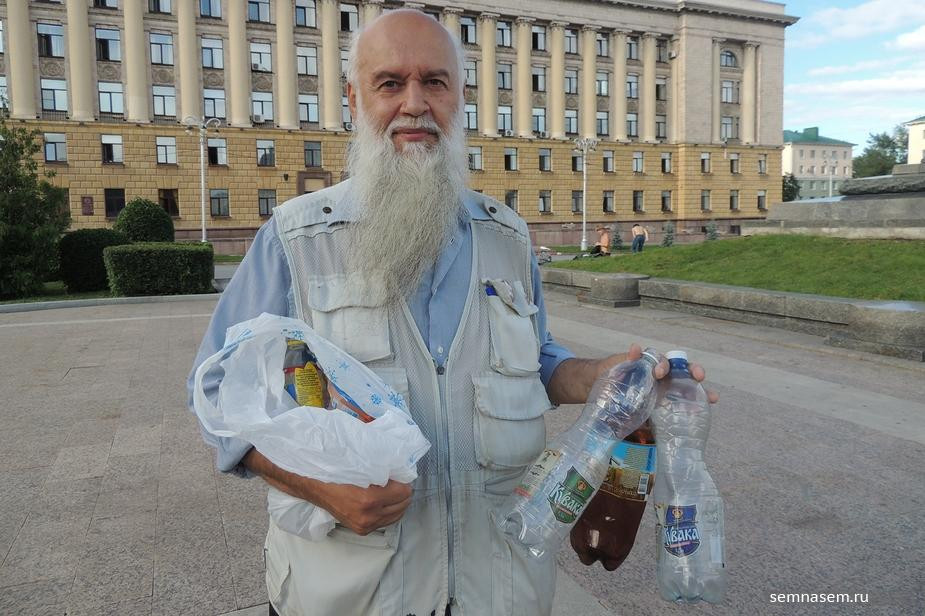 Yuri Voblikov with the picketing "props"

Yuri Voblikov from Penza held unusual pickets at the regional government building for several days. He used asphalt in front of the main entrance instead of a poster and bottles of water instead of paint. The inscriptions remained there for three to five minutes, this allowed drawing dozens of requirements per hour without having any problems with the police. Read 7x7’s review to learn where the resident of Penza got water, what other inventions he used for pickets, and why he chose such an unusual format for rallies.

"Wash off the inscription immediately!"

Yuri Voblikov made almost 40 calls during Vladimir Putin's phone-in on June 30. Basically, he asked the president to pay attention to environmental problems in Penza Oblast, cutting down trees in forests and public gardens, as well as the construction of a landfill in the village of Stepanovka.

"Almost 480 residents of Stepanovka out of 800 have signed up against the construction of the landfill, and that is just in a week. They are afraid that the waste will poison local springs flowing into the Penza reservoir. Therefore, we demand the thoroughest inspection of the project’s environmental safety," Voblikov told 7x7.

According to the activist, 100 hectares of agricultural lands were delimited for the construction of the landfill, and then they were switched to the status of industry lands through public hearings. And a new five-kilometer power transmission line is being conveyed.

After Voblikov informed the president about the problems, he decided to duplicate his appeals for local officials. From July 1 to July 5, he went to the regional government building and drew slogans with water on the asphalt. Many of them had the surname Putin. The shorter the word, the less water is required, says Voblikov:

“Putin requires only a liter, if you write in two-meter letters. And Stepanovka requires two or three liters already.”

The activist carried water for his appeals from public toilets in the nearest shopping centers and cafés. Watchmen in the government building refused to give him water.

"When I ran out of water for the first time, I went to the government and said, 'I have not finished the slogan about Putin.' The watchman said, 'What are you doing?! Stop it! Wash off the inscription immediately!' I said, 'How am I supposed to wash it off? Give me some water!' and they did not give it to me," said Voblikov.

Each slogan remains on the asphalt for three to five minutes, depending on the air temperature. Passers-by are smiling, officials are hiding behind window curtains, the police did not come up once in five days. According to the activist, "they were just afraid to step on Putin."

Inventions for a dialogue with authorities

Yuri Voblikov is a patent engineer by training, so he also decided to invent something new for a dialogue with officials.

"Back in Soviet times, I wrote, ‘Honor of Work!’ with a digging hoe on a garden-bed during weeding. Then I painted the village office’s roof and wrote there, ‘All Power to the Soviets!’ And when the weather is hot, some freshening up would be nice, so I decided to combine three in one: I am freshening up the air, washing the asphalt and conveying the position of the people to the government offices. Officials do not even have to go anywhere now — they can just look out the window."

Yuri Voblikov has invented some other formats of protest actions. According to him, in the early 2000s, he pasted letters made of scotch tape on polyethylene used in greenhouses. He gave this technique to Greenpeace: activists used it during the G8 Summit in Moscow in 2006. Putin and Merkel had a chance to see Voblikov's invention that time.

In 2020, the resident of Penza came up with a "flying voblik" — he put political slogans on an inflatable plastic disk, which is usually used to decorate wedding interiors.

“Instead of wishing love and happiness, I wrote a political message to the Plenipotentiary Representative for the Volga Federal District. The disk was tied with a string and rose up to the fifth floor, right into the window I needed. Officials are very busy; they have no time to look for me standing there with a poster. But they could learn the opinion of citizens simply looking out the window,” said Yuri Voblikov.